Let’s make a puppet using PoseNet and two servo motors. The puppet can change the posture up and down and left and right.

They need to be fixed tightly because the strong force from puppet inertia will be applied at the point of contacting them between them when they move quickly. 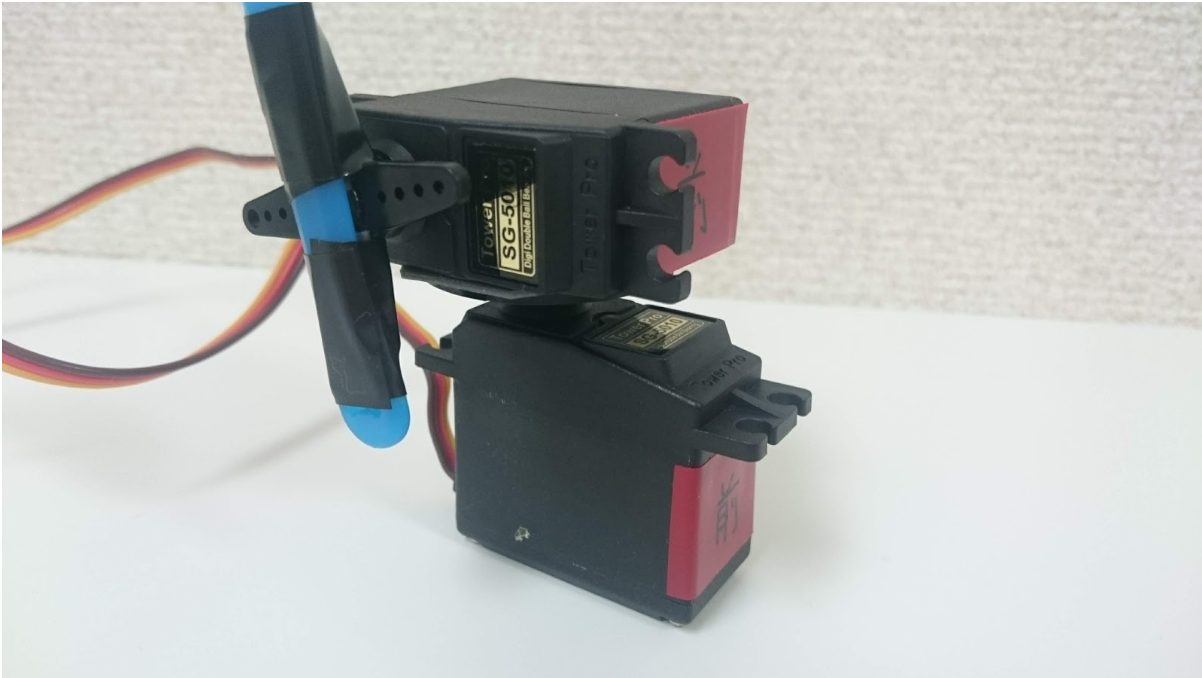 Then, put the stick to the upper Servo Motor (the blue one in the image above), and cover it with the puppet. Be careful not to idle.

Connect Servo Motors to an obniz Board like the table and the image below by referring to Servo Motor Library. Of the two servo motors, one is for the yaw(z)axis, the other is for the pitch(y) axis.

In this program, you can switch three modes.

It is recommended to refer to the “Program” below.

Elements whose classes are specified as “view-contents-mode1“, “view-contents-mode2” and “view-contents-mode3” are displayed only in each mode. You can select the mode from 1 to 3 with the select element. Pressing the SET button toggles the display according to the value of the mode selected at that time and executes bindPage() when using PoseNet and start posture estimation.

In mode 1, the inertial sensor value of the device is used.$(Document).ready is executed when loading of HTML has completed, and here,

every time the pose of the device is obtained, yaw and pitch are calculated from eventData, and it is made to be able to refer at any time as smp.yaw and smp.pitch. The value is adjusted using the constrain function because the servo motor rotates from 0 to 180 degrees.

In mode 2 and 3, the pose estimation by Web camera and PoseNet are used. We referenced this website. http://developers.gnavi.co.jp/entry/posenet/hasegawa

Setting up of PoseNet and web camera are done in bindPage(); and start pose estimation with detectPoseInRealTime(video, net); . net.estimateSinglePose(video, imageScaleFactor, flipHorizontal, outputStride); is actually the part where the pose is estimated.

In drawPoints(poses, ctx); , we get the coordinates of the parts, such as eyes and nose from the pose estimation results, and in the canvas, points and their part names are drawn at the place of each part.

Driving of the servo motors

The angles of servo motors are updated by using the setInterval function in the startServo function.

When you start the respective modes, Mode 1 … startServo (smp, 50) Mode 2 … startServo (mypose, 100); Mode 3 … startServo (myposition, 100) is executed, for example in mode 1, concerning the variable “smp“, updateServo function which is to update the angle of the servo motor by the values of yaw and pitch of “smp” will be called every 50 ms.

Since the Smartphone’s inertial sensor is used in mode 1, and web camera and PoseNet are used in mode 2 or 3, this program may not work depending on the device. (It is not necessary to connect to obniz if you want to do only the operation confirmation below.)

Operation confirmation of the inertial sensor

Execute the program, select mode 1 and press the SET button, then yaw, pitch, and roll values ​​are displayed on the line labeled “RAW:” in the “Status” view at the bottom of the screen. When keeping the Smartphone horizontally and rotating it like a compass needle on the horizontal plane, if the leftmost value (yaw) changes between 0 and 360 degrees, it works properly. We confirmed the operation with these environments.

Execute the program (HTTPS connection required), select mode 2 or 3, and wait a while. If the image of the camera appears and the position of eyes and nose are recognized, it is working properly. We confirmed the operation with these environments.

In the case of Smartphones, in a low-speed mode of about 1 fps in the mode using the camera, but in MacBook Pro, it got about 10 fps.

When you have completed operation confirmation, let’s run the program below!

Also, to prevent the servo motors from moving rough, Max Speed ​​and LPF can be adjusted with bars. LPF is the coefficient of the low pass filter. The filter on the right is stronger and stops at the far right. The smaller the Max Speed ​​and the larger the LPF, the servo motors move gently, but the slower the reaction. If it is reversed, the reaction is early, but it gets rough.